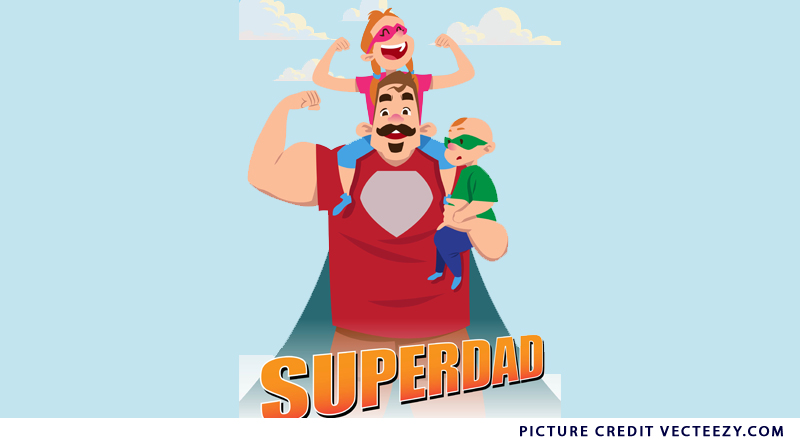 Back in the Neolithic era, when man was a farmer toiling with his plough, the woman stayed back at home, cooked the meals and looked after the kids. [1] As we evolved; our society, our family structure and our modes of procuring food evolved too. With an increasing number of families having two working parents and a steady tilt towards nuclear homes, there has been a reflective change in our outlook towards parenting. Dads are now taking on more essential duties, beyond just their recreation time with the kids. The quality of the bond and the quantity of the time that dads spend with their kids is different now than what it maybe two generations back.

According to a report published in ‘Changing rhythms of American family life’ by Bianchi, Suzanne M, Robinson JP et al, [2] if we were to go just by figures, the contribution of men in childcare has tripled in terms of the time spent, between 1965 and 2003. Mrs Manju Agarwal is an entrepreneur who runs her coaching centre and personal tuitions for 8th to 12th graders in Mumbai. She notes, “The dads these days are catching up! I see these neo-dads who come along with their wives and children, to discuss the details of the teaching curriculum with me, to know the progress their child is making and sometimes, to drop the child for the class. Some of them arrange for a meeting with me after their office hours, only so that they can personally be present to discuss their child’s academic strengths and weaknesses”. Fathers are more willing now to chip in the various small-big errands involved in bringing up their progenies.

From changing a diaper to making Maggie noodles to taking the child for their vaccine shots; some of our papas are sharing their duties very well. Dr Indu Khosla, a senior paediatrician, notes that while dads are more involved in bringing up their kids now, than what it was ten years ago; this trend is more in the educated class and where both the parents are working. Mr Gupta, a senior citizen who comes for his daily walk to the garden where we take our kids to play in the evenings, seems to agree to the winds of change too. “Ye aaj kal ke naye naye papa log, garden mein aate hai. Kabhi toh khud push-ups maarte hai, toh kabhi bacho ke saath jhoole par dikhte hai.  Humaare time par kahaa hume naukari se hi fursat miltii thee!”

At this point, I almost hear the thumping of an army of mothers, complaining that though the dads may be contributing to childcare, it is still not equal to the amount of time and effort devoted by the mothers. “Anything is more, when you are expected to do nothing,” whines one of my friends, who feels that men often feel heroic or worthy of an award when they do ‘out-of-syllabus’ duties like attending a parent-teacher meeting at school. While a part of the lack of male contribution in childcare could be attributed to the patriarchal mindset we nurture; maybe a part of it could genuinely be due to the longer working hours and the more substantial financial responsibilities that the men shoulder. However, can that aspect of the social functioning be ignored? Is money not essential to run the show? We understand the dads sometimes need their beer mugs and a comfortable couch on a Sunday afternoon. Maybe there is a thin line between enjoying a well-deserved leisure period and simply being lazy and chauvinistic.

To encourage and allow more paternal participation in child rearing, we need more ‘family friendly’ laws and policies and a more gender neutral support system. India may soon take a leaf from countries like Norway, Iceland and Sweden, by pushing the “Paternity Benefit Bill, 2017’ in the next session of the Parliament, which will allow the fathers to avail of three months’ paid leave after childbirth. [3]

How much help by the dads is enough? I hear the dads complaining, “Are we not the most caring species anyway? Our kids stay with us for 18 years (at least!)”. Speaking of the contest, did you know that the male penguins are one of the most devoted dads in nature. The pudgy male penguin sits patiently for weeks and incubates the eggs laid by the female counterpart, while the latter goes out fish hunting for the babies-to-come. What may seem to be a Yash Chopra touch to the already doting hero is that he fasts during this period, until the egg hatches. [4]

While it may take many more years of evolution for the humans to do something like that, it is worth patting the backs of the fathers who are leading the way and setting the trend! While Darwin may not vouch for it, I feel the metamorphosis of dads to super-dads in underway…

This blog had first appeared on the site: https://tanyamunshi.com/lifestyle/parenting/from-dads-to-superdads/